Medemblik has always been the center of regatta sailing in the Netherlands. It is the home port and main venue to many international events such as multiple European or World Championships in various classes, but also to events for yachts such as the 24 Hour Regatta. The sheltered harbour, the picturesque and inviting city center as well as the world class Regatta Committees have all contributed to Medembliks success as harbour town!

Entries
Entries should be made by Monday 20 June 2011 to take advantage of the early bird entry fee of EUR200. Entries received after that date will need to pay the normal entry fee of EUR240.

To be eligible to compete, competitors shall not have attained their 22nd Birthday before or on 31 December 2011.

Coaches, team leaders and support teams are also required to enter and pay the registration fee of EUR50.

Pre-Championship Clinic
Taking place immediately before the 470 Junior World  Championships in Medemblik, The Netherlands, the 470 Junior Racing Clinic will provide the ideal opportunity for last minute training. Daily coaching, racing and debriefs will be run by the 470 appointed coach Andreas Kosmatopoulos (GRE).

Charter Boats
BlueBlue of Poland are making charter boats available for the 2011 470 Junior Worlds. The charter price is approximately EUR2000 for a complete ready to sail boat. All requests must be received by 15 May 2011 to Lukas Formella directly at:
Sport-Sails Center
Mobile: +48 664196558
Email: office@blueblue.pl

Swedes Prevail in 470 Tug of War

Series Leaders Suffer, But Not as much as the Rest at Junior Worlds 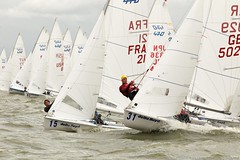