Prior to the 470 World Championship, the Centre Municipal de Vela at the Olympic Marina will be available for training.

Following the success of the Charter Boat Programme at the Perth 2011 ISAF Sailing World Championships, the International 470 Class will again be providing eight brand new 470s for charter at the 2012 470 World Championships. The 2012 470 Worlds are the final qualification event for the 2012 Olympic Games, with 5 places available for the 470 women event and 7 places available for the 470 men.

The 2012 Charter Boat Programme is focusing on support to teams representing nations which are not yet qualified to the 2012 Olympic Games.

The International 470 Class has partnered with 470 builder BlueBlue, who are based in Poland, to provide eight charter boats for the Championship at a considerably subsidised charter fee of EUR300 per boat per team. Click on the Charter Boat Programme link in the "Useful Links" box for more information and the application form.

Come and Join the 470 Class at the 2012 470 World Championship Clinic. Taking place immediately before the 2012 470 World Championship in Barcelona, Spain the Racing Clinic will provide the ideal opportunity for last minute training. Daily coaching, racing and debriefs will be run by the 470 appointed coach and multi-Olympian Andreas Kosmatopoulos (GRE). The Championship Racing Clinic will run for three days from 7-9 May 2012. Click on the Championship Clinic link in the "Useful Links" box for more information and the application form.

One Race for All Fleets Completed 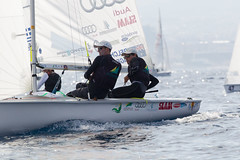